What can‘t you do with a 17-foot Grumman canoe?

For the best part of ten years, my office was the stern seat of a 17-foot Grumman canoe—my Marsh Arab. Over the course of Chesapeake Bay Foundation field trips for school students and families in the 1970s and early ‘80s, I paddled her 3,000 miles or more around the Chesapeake’s tidal tributaries in the company of eight of her sisters and their occupants, and she has taken me fishing countless times since. Please forgive me if I sound dogmatic, but those experiences have given me a deep appreciation for these able, endlessly versatile boats. There are good reasons why the indigenous American canoe has endured for millennia, and why CBF and other conservation, Scout, and state park systems have continued with thousands of canoe-based field trips all over the Chesapeake watershed for nearly half-a-century.

First off, let me admit that a 17-foot Grumman canoe has all of the aesthetic appeal of the old Ford pickup truck that I used to tow CBF’s canoe fleet around the region. The boat is aluminum and noisy, but it is durable, stable, and seaworthy with a blend of acceptable speed and substantial load capacity. The latter is no accident. In 1947, Grumman Aircraft engineer John Achlich, modeled the 17-footer after an early Twentieth Century, E.M. White-designed, wood-and-canvas, guide canoe that was known for its broad usefulness, with allowances for the limitations imposed by the process of stretch-forming aluminum. I’m still paddling Marsh Arab simply because she does what I need her to do, and she’s virtually indestructible.

Other paddling designs, concepts, brands, and materials offer advantages in maneuverability, quietness, speed, looks, and abilities, but the utility of the open canoe endures. Over the past thirty years, kayaks of widely varying hull shapes have become more popular than canoes for casual paddling and fishing as getting around with a double-blade paddle is more intuitive than learning to use a single-blade. A single blade paddle causes the canoe to turn as well as move forward. The key is realizing that it’s a multi-faceted tool designed to move water in multiple directions, depending on how we manipulate it. Learning to keep a canoe moving in a straight line, and to turn when and where you want, is not rocket science. We’ve taught thousands of people of all ages and backgrounds to do it, and there are many ways to get good instruction online and on the water.

Moreover, open canoes are generally more stable than kayaks and lend themselves well to paddling with family, friends, gear, and even dogs. They evolved as general utility vessels that worked for a living. That utility is what has made them so successful for teaching Bay ecology and natural history on appropriate parts of the Chesapeake’s rivers and creeks.

Consider what we’ve done with them. This list is not complete, because field educators at CBF and other organizations are constantly developing new ways to teach with them, but it reflects some of the ways I’ve used the boats to give students of all-ages good days on the water.

First, paddling a canoe brings a Zen sort of satisfaction. I remember the look on my daughter’s face the first time she realized as a child that she could make Marsh Arab move with a small paddle that an uncle had made for her. Even that big old hull slides along in a most pleasing way. Second, the pace teaches the value of speed, and the lack of it, in paying attention to a waterway. It’s akin to taking a hike instead of riding a bicycle or a motorized vehicle. A couple of miles on a tidal creek such as Kings Creek on Maryland’s Choptank River or Gordons Creek on Virginia’s Chickahominy offer all sorts of coves and side branches to explore, plus current eddies, trees, marshes, birds, fish, and other critters to look at and ponder. John McPhee notes in The Survival of the Bark Canoe— “A canoe trip has become simply a rite of oneness with certain terrain, a diversion of the field, an act performed not because it is necessary but because there is value in the  act itself.”

Early on in her career, Marsh Arab acquired a portable sonar unit that helped teach us to visualize those creeks and rivers in three dimensions. It showed us fish and taught valuable lessons in how downstream flow and tides shape streams as they move sand, gravel, and mud around, and how those forces create habitat for plants and animals. With care in calm conditions, I could stand in Marsh Arab and throw a small cast net into some of those places.

With the ease of beaching, the canoes allowed us to use minnow seines to discover what lived along the shores. We caught bull minnows, silversides, baby rockfish, largemouth bass, catfish, and even perfectly-formed baby red drum on one occasion at the Hole in the Wall fishing grounds near Gwynns Island, Virginia.

Marsh Arab carried a minnow seine with nine-foot poles, a large first aid kit, a dry-bag of spare clothes, and towels for the occasional student capsize (life-jacket wearing was/is mandatory), extra paddles, and lunch, which generally meant a picnic on a beach or in a patch of woods. Landing for lunch allowed for repeat lessons in climbing out safely by taking advantage of the canoe’s inherent stability. Student lunches did, however, sometimes produce sugar-highs that made a few forget the landing practices they had just learned, resulting in the occasional, minor spill on departure. Fortunately, a canoe’s inherent portability make it easy to empty a partially capsized boat and continue quickly with the day’s itinerary. Cold weather in spring and fall engendered more care, even in the face of excessive M&Ms.

On multi-day trips in summer, we had opportunities to cover more water and teach advanced canoe-handling skills. Once our clients became comfortable with steering, it was possible to coach them into synchronizing bow and stern strokes. Rowing crews call this “catching the swing”, and it takes amazing coordination in an eight-person shell. In a canoe, it’s much easier, and it results in remarkably improved efficiency that enhances  the Zen.

We taught old-style long strokes taking advantage of leverage with arms, shoulders, and backs using paddles longer than those that are in vogue today. I used a six-foot Maine guide’s paddle made of springy ash wood with a broad blade, which gave me tremendous leverage for moving water to herd and help my charges  as necessary.

Another seemingly unorthodox tool that became standard equipment for CBF trip leaders was a double-bladed paddle sized for canoeing. Mine are nine-feet long. If a 17-foot Grumman is like a water-borne pickup truck, adding a double-blade is like dropping a diesel engine under the hood, especially when paddling solo. Using the same sort of classic leverage principles, speed under the double-blade comes close to that of a strong tandem crew, which made the device invaluable in cases where I had to go solo. In addition to speed, it also provides great control on windy days.  I really enjoy paddling Marsh Arab  with a double-blade, and I don’t understand why more people don’t use one. They were standard issue for canoeists in some parts of our country a century ago.

Yup, I love canoes. I submit that these classics are under-rated as proper boats for exploring much of the Chesapeake.

CBM Editor at Large John Page Williams  is a fishing guide, educator, author, and naturalist, saving the Bay since 1973. In 2013, the state of Maryland proclaimed him to be an Admiral of the Bay.

Regulator debuted its much-anticipated 32-footer at the Fort Lauderdale Show in October. Measuring in at 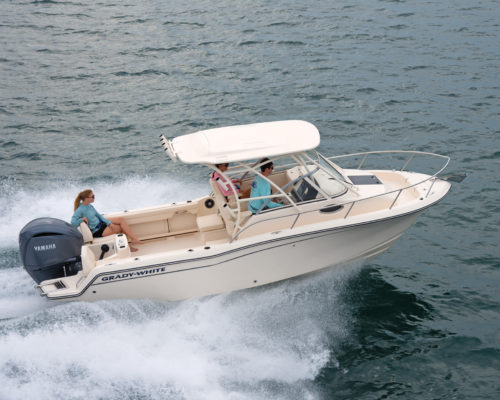