Diving into the layers of Maryland’s official state dessert

Along Route 50 from the Bay Bridge to the ocean, roadside stand after roadside stand proudly offers Smith Island Cake, as do restaurants from the D.C. suburbs to Annapolis to Baltimore to Cambridge. Today, it feels obvious that the dessert with eight to ten layers and equal parts cake and fudgy frosting should be the Maryland State Dessert. But before the 1990s, the cake was hardly anywhere other than Smith Island. Outside of the lower Eastern Shore, the cake most associated with Smith Island was the crab cake. With equal layers of lore and tradition, the cake’s greatness stems from the unique Smith Island community.

In 1981, Frances Kitching shone a spotlight on Smith Island cuisine with Mrs. Kitching’s Smith Island Cookbook, co-written with Susan Stiles Dowell. The book is full of recipes typical of Chesapeake Bay fishing communities: crab cakes, crab soup, clam chowder, crab imperial, and just about any other crab dish imaginable. Shockingly absent from the first edition is anything resembling Smith Island Cake. Reports of church camp meetings and other events on Smith Island mention the dessert of choice as pie, a dessert Mrs. Kitching enjoyed, too. In a profile of Mrs. Kitching in The Washington Post, she said, “Pies were my grandmother’s favorite, and I learned everything I know from her.”

One reason she didn’t include the cake might have been because Mrs. Kitching didn’t think it was unusual. In 1989, folklorist Elaine Eff traveled to Smith Island to interview Smith Islanders and help create the Smith Island Visitor’s Center. Everywhere she went, she found a cake with thin layers and equal parts icing and cake. When she asked, “What’s this?” she heard the answer, “It’s cake,” as if there wasn’t anything unique about it. She, however, knew that this was no ordinary cake; this was uniquely Smith Island. Although Kitching later took credit for possibly having made the first Smith Island Cake, others on the island don’t substantiate that claim. Well-known bakers like Mary Ada Marshall say they learned it from their grandmothers, who in turn learned it from their grandmothers. Eff tried to figure out if the cake originated with one woman, but she found it was truly ubiquitous on the island, and each matriarch had her own variation of the recipe and number of layers in her cake.

Equally mysterious is where the thin layers originated. Eff points out that before the 1950s and 60s, the island didn’t have electricity and making thin layers in a wood-fired oven was easier than thick layers. Another theory says that the thick, fudge-like icing between thinner layers helps keep the cake fresh when watermen are out on their boats. But as Kara Mae Harris of the Old Line Plate cooking blog points out, “The rising fame of the cake only serves to further confuse the cake’s true origin or ‘purpose’—as if a cake ever needed a purpose.” Can’t the purpose of the cake’s design just be eating the highest cake-to-icing ratio possible?

The community origins made it a perfect candidate for a state food. In the mid-2000s, Smith Island’s economy was already dealing with a loss of population and jobs for watermen. Marylanders on the Lower Eastern Shore Heritage Council and those involved in the tourism industry thought that designating the cake as the Maryland State Dessert would not only provide an economic opportunity for women to sell the cakes, but help to make Smith Island a place that people cared about. They approached then-Delegate D. Page Elmore, who drafted legislation and introduced it in the 2008 session. Eff remembers people saying a bill like this would never pass the first time around. As with almost anything that gets designated representative of the state, people always seem to take issue with it. One 2008 article in the Baltimore Sun mentions Berger cookies, Hutzler’s fudge cake, or Haussner’s strawberry pie as alternatives. When you read through those options now, Smith Island Cake seems like the natural winner. Set aside the fact that Hutzler’s department store and Haussner’s Restaurant are now gone, those three desserts were born to be commercial, while the people of Smith Island baked theirs for weddings, picnics, funerals, church events, or just everyday consumption—it was a cake of the people. The Smith Islanders had more than argument, though; they also had cakes. Eff says they delivered a slice of cake to every member of the general assembly that session. The bill passed.

National news outlets picked up the story, and before the year was out, people knew the name Smith Island. Brian Murphy, an entrepreneur with a commodities-trading background, immediately recognized what was special about the cake: the story. Within a year of the legislation passing, he opened Smith Island Baking Company in Ewell, and began delivering cakes across the country. The bakery employed local women, and the notoriety of the cake allowed women like Mary Ada Marshall to sell their cakes by mail too. Murphy moved his operation to Crisfield in 2015, after years of dealing with the logistics of shipping cakes from an island in the middle of the Chesapeake, accessible only by boat.

Smith Island residents felt the loss of the move. Women employed by the company lost their jobs and tourism suffered. “A lot of people come [to the island] just to come to the bakery,” says islander Darren Jones. In 2018, he and his wife Kathey decided to do something about that. They opened the Smith Island Bakery in Ewell, with the goal of helping the island economy and giving visitors a taste of authentic Smith Island, baked on-site. Today, they send cakes across the country and offer classes in cake baking. Darren says that the cake and its status as state dessert has “drawn a lot more attention over here,” and he hopes that attention will keep up Smith Island’s economy and population. So far, it’s been a sweet success. 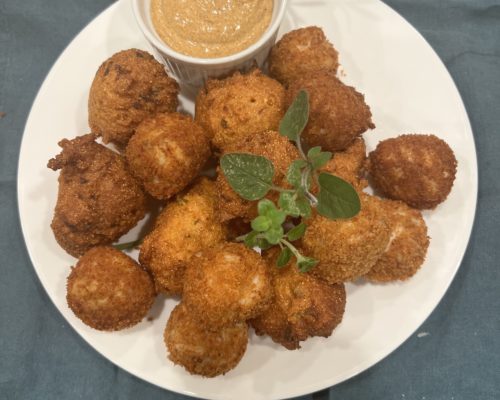 from Master Chef Carlos Gomez-Starnes POV Restaurant at Pier450, Ridge, Md. Since its opening in

Like every hopeful child, we keep our eyes open for dependable holiday gifts to add