It’s a fresh spring day at the Chesapeake Bay Maritime Museum when I first meet the next incarnation of Maryland Dove. The build, started in 2019, is well underway. As lead shipwright Joe Connor guides me into the huge white tent along the museum’s bulkhead, the effect is straight out of Gulliver’s Travels. Her huge skeletal timbers dwarf the shipwrights who busily swarm, attaching planking, securing knees, breathing life into this sleeping giant. Once complete and splashed into St. Michaels harbor this fall, she will briefly tower over the deadrises and buyboats in the museum’s fleet before setting off for her permanent berth at Historic St. Mary’s City—a time traveler from the Golden Age of sail.

In the last century, Maryland Dove has been resurrected three times: once, in 1934, to commemorate Maryland’s tercentenary; again in 1977, to serve as a floating exhibit for Historic St. Mary’s City; and finally, the current iteration under construction at the Chesapeake Bay Maritime Museum. Counterintuitively, as each build has gotten progressively farther from the original in time, it’s gotten closer to period accuracy. We’ve learned a lot about 17th-century vessels in the last hundred years. Thanks to advances in maritime archaeology and new technology including submarines, scuba equipment, and remotely-operated underwater vehicles, Connor and his team are building a Maryland Dove that those English colonists might have recognized.

That so much attention has been lavished on the Dove may surprise students of Maryland’s early history. For starters, it was the larger Ark that carried 140–150 settlers and their supplies in 1634 as they established the Maryland colony. The Dove, it’s now believed, followed behind with little on board but ballast. Her mission was to serve as a coastal trading vessel along the Chesapeake and other ports on the East Coast. But Dove’s time as the Maryland colony’s pickup truck was short. In 1635, loaded with furs and corn on a return voyage to England, she foundered and sank. According to Joe Greeley, the former waterfront director at Historic St. Mary’s City, the location is a mystery. “She’s lost at sea, somewhere between Maryland and England. It could be 20 feet off our dock, it could be right off the coast of England—we’ll never know. It’s a big ocean and ultimately, if the ocean wants you, the ocean will take you.”

Despite the short lifespan of the original Dove, her outsized Maryland colonial symbolism has endured, something that can largely be chalked up to practicality. Of the two founding vessels, Dove was significantly smaller—40 tons to the Ark’s 400 tons—and therefore cheaper to build and maintain as a replica.

The first incarnation of the Maryland Dove (the name given to the three replicas built by the State of Maryland in the ’30s, ’70s, and today) was a slapdash affair. The budget was tight—the build began in 1933 during the last year of the Great Depression—so the state got creative. Maryland’s Conservation Commissioner Swepson Earle retrofitted a 36-foot motor sailor by lengthening the hull an extra 10 feet, adding a superstructure to mimic the 17th-century upper decks, and swapping in a ketch rig. Local Sea Scouts made her sails and rigging. The overall effect might not have been accurate or pretty (Commissioner Earle pronounced it “a fair resemblance”), but for an elaborate prop meant to vaguely represent old-timey Maryland at summer yacht clubs and regattas, it served its purpose.

The second life of Maryland Dove started in 1977. Commissioned by Historic St. Mary’s City, this version of Maryland Dove was not a slavish replica either. Intended to generally represent a medium-sized cargo ship of the time, the vessel would serve as a floating exhibit at the museum’s waterfront once complete. The plans for this Maryland Dove were designed by naval architect William Baker. One of the foremost 20th-century authorities on the design and construction of colonial wooden vessels, Baker also designed plans and specifications for famous reproduction historic vessels such as Mayflower II and Gjoa.

The work was undertaken by a respected Eastern Shore boatbuilder, Jim Richardson. In a July 8, 1977 interview with the Baltimore Sun, Baker said of Richardson, “There were only two yards in the country I’d let build her. One of them is a yard in Maine; the other one is right here. Since this is a Maryland vessel, it has to be a Richardson.”

Richardson’s bread and butter were traditional Chesapeake wooden sailing vessels, but he’d moonlighted on some pretty offbeat projects—such as the 18′ cable car and 65′ Haida dugout canoe from the Pacific Northwest he’d restored side-by-side for the Smithsonian. Richardson came out of retirement for the Maryland Dove project and assembled a team of young shipwrights, men and women, for the massive build at his shop on the Choptank’s LeCompte Creek. With a creative mashup of 17th-century tools, Eastern Shore timbers, and skipjack-style boatbuilding techniques, the Maryland Dove took shape at Richardson’s shop in only 15 months.

For over 30 years, the 1977 Maryland Dove served as a floating exhibit and ambassador for Historic St. Mary’s City. During that period, Historic St. Mary’s City’s focus on living history deepened, based on 20th-century archaeological advances and research. The site’s interpretation expanded into four different hands-on exhibits that told the story of early Maryland history, reflecting the highest standard of period accuracy. And as new information came to light about sailing vessels in the 17th century, Maryland Dove was the next exhibit to be reassessed. In particular, Historic St. Mary’s City was interested in moving away from the general tobacco trading ship the 1970s version represented. For the third life of Maryland Dove, they planned to build a replica that looked and sailed like the original.

To meet that challenge, the Chesapeake Bay Maritime Museum started by sending lead shipwright Joe Connor and rigger Sam Hiltgartner on a pilgrimage to learn about 17th-century boatbuilding in the most immersive way possible—by observing and exploring an actual Swedish warship, Vasa, constructed in the 1600s. Remarkably intact, the Vasa sank on her inaugural voyage and spent four centuries submerged on the bottom of the Stockholm harbor before being carefully salvaged in the 1960s.

Through the discovery of wrecks like the Vasa, knowledge of the maritime world of the past was vaulted from conceptual to physical. Where Will Baker’s research was done in archives, Connor and Hiltgartner were able to learn from the real article in Sweden, recreating elements from the past such as rigging, lines, and construction with a time-traveler’s expert eye. The result is a vessel that will balance modern practicality—Coast Guard certification and the ability to take out passengers—with painstaking period detail. In particular, a new Boyer rig and sail plan will allow the new Maryland Dove to sail closer to the wind, an essential element of a coastal trading vessel. In the hull, Connor has incorporated period boatbuilding techniques including wood fasteners, wood joints, and big timber joinery.

A wealth of other small details breathe authenticity into the project. Hiltgartner and other shipwrights have handcrafted an impressive inventory of individualized blocks for the running rigging—another lesson gleaned from the Vasa. During the pandemic shutdown, shipwrights took bags of oakum home to spin into caulking, custom-turned handmade bolts in bronze, and smithed hinges and latches for the ship’s interior in backyard shops. To date, despite the inevitable slowdowns of 2020, Connor and his team have kept the Maryland Dove build roughly on time for its scheduled launch this October, with rigging and finishing to be completed in Fall 2022.

As Connor walks me through the sawdust piles and catwalks of Maryland Dove’s build site, he seems satisfied with the progress. “We’ve all got a lot more gray hairs but we’re all still moving somehow. We’ve pieced her through most of the big challenges,” Connor says. He acknowledges it’s been a herculean effort, but one he’s tried to approach with his team one step at a time, with an appreciation for the importance of the project and its legacy. “We’re getting a chance to use all the right materials, start with a really good design, and cut joints and install pieces that will outlive the craftsmen making them,” says Connor. “This is a once-in-a-lifetime opportunity—and it’s incredibly exciting to be a part of that.” 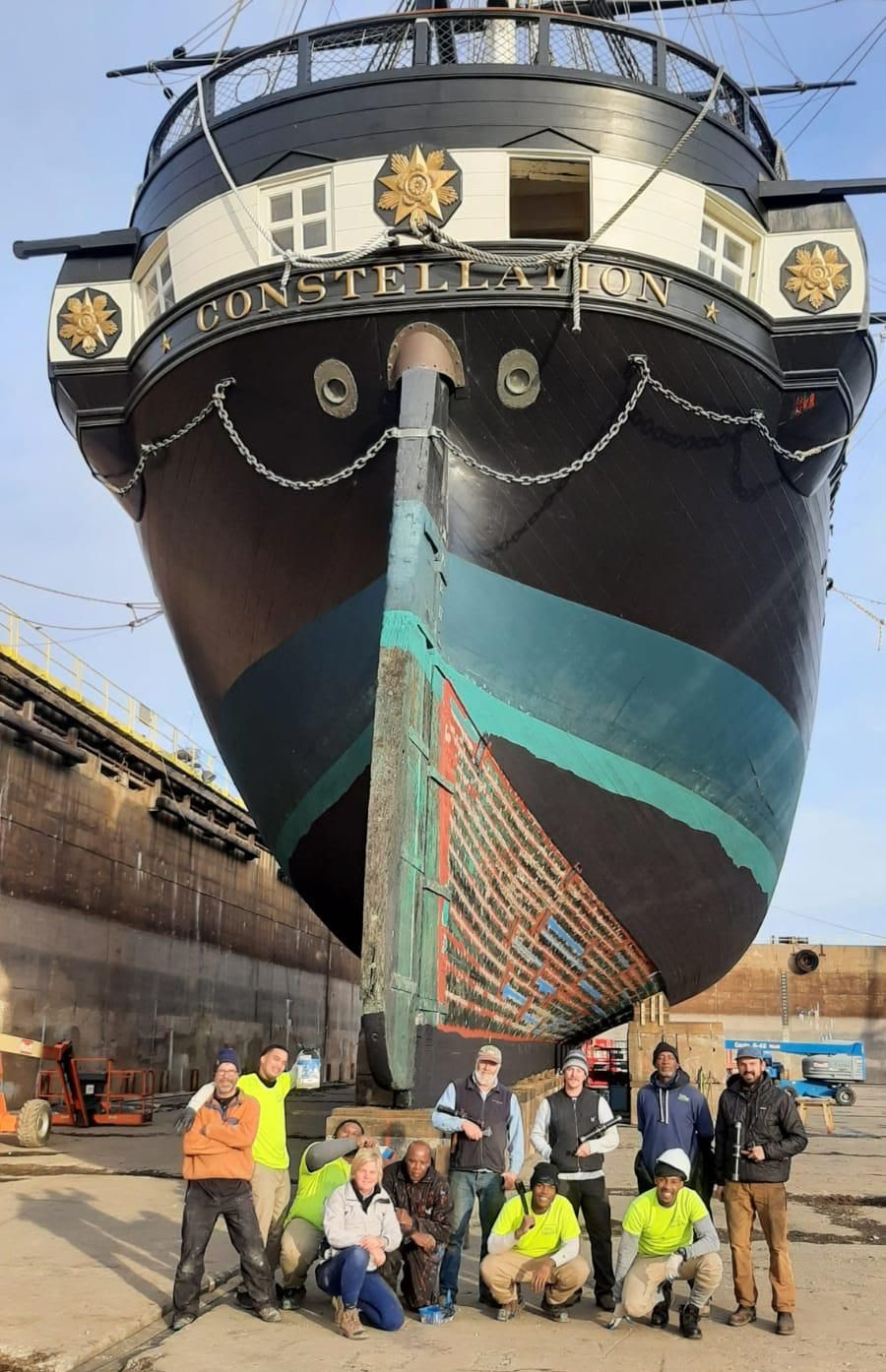 The Bay’s oldest and largest wooden boat gets the love she needs. Driving over the

How a small team of turn-of-the-century scientists mapped over 1,600 square miles of Maryland oyster beds.