The gray January sky on a Sunday promised impending snow as the engine on the Boston Whaler coughed to life with a quick charge and some coaxing. We would not sail our International 210s that day, deciding reluctantly to haul them out after a delightful run of Sunday races through the fall and into the New Year. The freeze warning made it essential that we haul these moored boats before they became iced in.

We towed the first boat to the boatyard through a sheet of skim ice, leaving an open trail, which soon closed with encouragement from the light wind, making a bit of ice-breaking necessary on each trip. This slightly-Shackletonian adventure continued through the morning until our fleet was at the hoist. There, enthusiastic fleet members hauled them up and onto their trailers, removed the sails and loose gear, and put them away for the winter. Then we retreated to a warm fire in the boathouse for drinks and food leftover from a wedding the night before. Talk turned a memorable T-bone collision, ordering new fleet jibs, why lower shrouds should be so loose, and plans for team racing next season.

The sailors who form the Gibson Island Yacht Squadron’s one-design fleet are the steadfast board members, committee members and the first to offer drinks to newcomers. One-design racers are usually the heart of a good sailing club and, as many clubs have found, establishing a fleet of club or co-owned one-design keelboats is a superb way to invigorate membership. Gibson Island sailors have proven this with nearly a century of one-design fleets beginning in 1923 with Stars, then 8 metres, 6 metres, Ensigns, J/22s and now International 210s. This is the essence of fleet building—leadership, shared work, and the satisfaction of accomplishment while keeping it fun.

Our latest one-design initiative began in 2006 with a discussion about what attributes might work best for our club and location. We wanted a boat that was good looking (classic, if possible) with a shallow draft for harbor racing in winter, steady performance without requiring intense hiking other than the sit-on-your-butt-and-lean-a-bit kind, relatively inexpensive and safe for river or occasional Bay sailing. We borrowed an Etchells to try (too deep and heavy), a Sonar (wonderful boats with all attributes we wanted except the availability of used boats), a Colgate 26 (too expensive new), a J/22 (been there, done that), and a Rhodes 19 (meh).

As we searched, I recalled one of my favorites—the International 210 designed by Ray Hunt in 1946, a double-ended beauty, fast, stable and easy to sail. There was no fleet on the Chesapeake, but the class is active in Michigan and around Boston. I found fleet contacts online and discovered a number of used boats for sale. Then, “Wait, here is one for sale in Maryland!” With a few calls, I found two partners willing to take a chance. It was late December when we went to the Rhode River to look her over. My first thought was, “This will do just fine,” with her unique narrow beam, long shallow cockpit, pointy ends, short fractional rig and beautifully curved stern. We bought her at a reasonable price.

The weekend of the NFL playoffs was forecast to be one of those balmy days we sometimes have during Maryland winters. We could sail her up to the Magothy with a moderate southerly if I could coerce someone nutty enough to take a 25-mile December sail with me in an unfamiliar open boat. We mounted an old single-cylinder Seagull outboard using C-clamps and a piece of 2X4 lumber robbed from a dilapidated picnic table, threw in some tools, a few quarts of mixed 10:1 fuel and a transistor radio for the game, and putted into the river. A few hundred yards out, our motor-mount split just as we coasted into the favorable morning breeze. We set the spinnaker and, even with a foul bottom, stepped right along with a murmuring bow wave past the South River, Thomas Point Light and the wide mouth of the Severn. With the Bay Bridge in sight and the Ravens down by a touchdown, the wind left us. As the sun descended, a chill crept over us, and we weighed our options. Should we paddle towards Annapolis?  I fashioned another mount of sorts from the other end of the broken one and we lashed the little Seagull to it. With my crew lounging outboard in the foot of the mainsail to heel the boat and submerge the prop, we made progress toward the Magothy as the exhaust banged out “bluh, bluh, bluh, BLA, BLA, BLA” when we rolled and dipped the propeller.

The early darkness and cold came as the Ravens blew their lead and lost. With it came a fresh breeze, cold and on the nose. The last miles in the dark, sliding through the Magothy narrows past Dobbins Island, were fast and wonderful, but by then we were ready for the warmth of the shore. We eased into the harbor and tied up at the boatyard. Our new fleet had begun.

We quickly accepted four more co-owners for our original 210. The plan was for syndicates of six owners per boat, figuring that on any sailing day, only half the sailors might be available. We could sort out the crews on the dock. With emailed photos of the boat and with a few winter-harbor test-sails, we easily found contributors for more boats. A few trips up to Boston yielded some project boats, purchased for less than $3,000 apiece. One-by-one they arrived on rusty trailers with improvised tail lights, brought down on epic drives by members blissfully unconcerned about the state of trailer wheel bearings and other such details. Meanwhile, I had the use of the Gibson Island Boat Works shop to replace keel-bolts, re-core the hulls and refit the boats. We brought in a painter to Awlgrip the decks and hulls, and several of our woodworking members made new seats from beautiful ribbon-stripe mahogany plywood with maple edging. The boats shaped up nicely with a total investment of around $7,000 each, including new sails.

The 30-foot 210 is a uniquely beautiful and innovative design with hard chines and an arc bottom originally designed for plywood construction. (Our boats are fiberglass). The boat has a narrow 5-foot 10-inch beam, a low-aspect-ratio sail plan, and a shallow 3-foot, 10-inch cast-iron keel in a Buck Rogers-wild-looking-ahead-of-its-time L-shape. They have a passing resemblance to Star boats until you get to the stern, which is long and finely tapered, sweeping into an arc that is lovely beyond words. The narrow beam makes them initially tender, but they quickly become stable when heeled with half the weight of the boat in a large bulb at the end of a tiny fin. The rudder hangs off a small triangular skeg similar to the Etchells or Star.

For our purposes, we eliminated the genoa the 210 Class uses, which were all the rage in the postwar era. A genoa suits the low sail plan but it makes the boats the devil to tack, and they blot out visibility to leeward and would be troublesome on the short courses and team races we envisioned. We designed a maximum-sized, class-legal blade jib sheeted well inboard, and we modified the mainsail planform to have about six inches more roach at the top, a full-length top batten and a loose foot for a more modern approach and look. The loss in speed is negligible, and the boats still balance out well. We made long whisker poles for racing without spinnakers to keep things simple on short-course frostbite races. Consequently, our relationship with the 210 Class is restrained but cordial. We are an isolated fleet, which we feel gives us the freedom to configure the boats to suit us best. Still, we host the Last Chance Regatta Invitational each year, and several New England boats come to race with us. We ask that they bring their small jibs, and generally have found that our boats perform well and equally against the class boats.

Barely a year after acquiring the first boat, our racing was underway as the fleet structure emerged organically in an egalitarian and welcoming fashion. With six fairly well-matched 210s on moorings along the Gibson Island causeway, we became a group of more than 40 members who pay a reasonable fee for virtually unlimited use of the boats for racing and day-sailing. The original shareholders paid a slightly lower yearly fee and recovered their investment over time. We eventually turned ownership of the boats over to the yacht squadron as an asset for members. Subsequently, we bought newer 210s and upgraded our fleet. Some members bought their own boats, increasing the fleet to nine.

Racing is most active in the fall and winter as most members have other boats and summer activities to tend to. We enjoy occasional summer events often enough to keep interest high, such as our Baltimore Light Distance Race, which begins in Gibson Island harbor and goes around the lighthouse in either direction with the requirement that the leader round twice or slow down to allow an overlap with the next boat to keep the racing tight.

We lend the boats to Gibson Island’s junior fleet for a week of practice culminating in a day of racing for the Eel Trophy, one of their favorite excursions. The kids love swimming off and dragging behind the boats on the sail home. Pizza awaits them ashore and the winners get their name on a beautiful half model plaque of the original Eel, a Star Class International Championship winner.

In the fall, we invite several clubs for a series of three-on-three team races. The 210’s classic lines and keel-boat performance makes for cerebral racing reminiscent of an earlier time of meter boats, which suits a more relaxed style—a far cry from the usual frenetic, hyper-aggressive team-racing game, leading to an excellent party at the end.

After 11 years of 210 one-design fleet racing, we have learned some elemental truths that may buck more current trends in sailing. Our Sunday racing is like sandlot baseball. We show up at the boathouse at the crack of noon and simply form up and pick teams, sometimes sorting out the crews on the launch ride out to the boats. We make new sailing friends that way.

New crews learn quickly and become skippers as the helm is passed around between races. Most importantly, except for specific events, we don’t keep score and there are no trophies. How well you sail and what you learn is more important than how you finish. Each race is an experience and, at days end, relaxing over hot chocolate or beer, we all know who was fast, smart or lucky, and who won the most races. We praise or chastise each other for good starts, overlooked fouls or brilliant maneuvers.

We race these slender keelboats for the fun and camaraderie. Sounds corny these days, but it works.

Tom Price is the Gibson Island sailing director. He has been an instructor, model-maker and mentor at the United States Naval Academy for over 30 years. 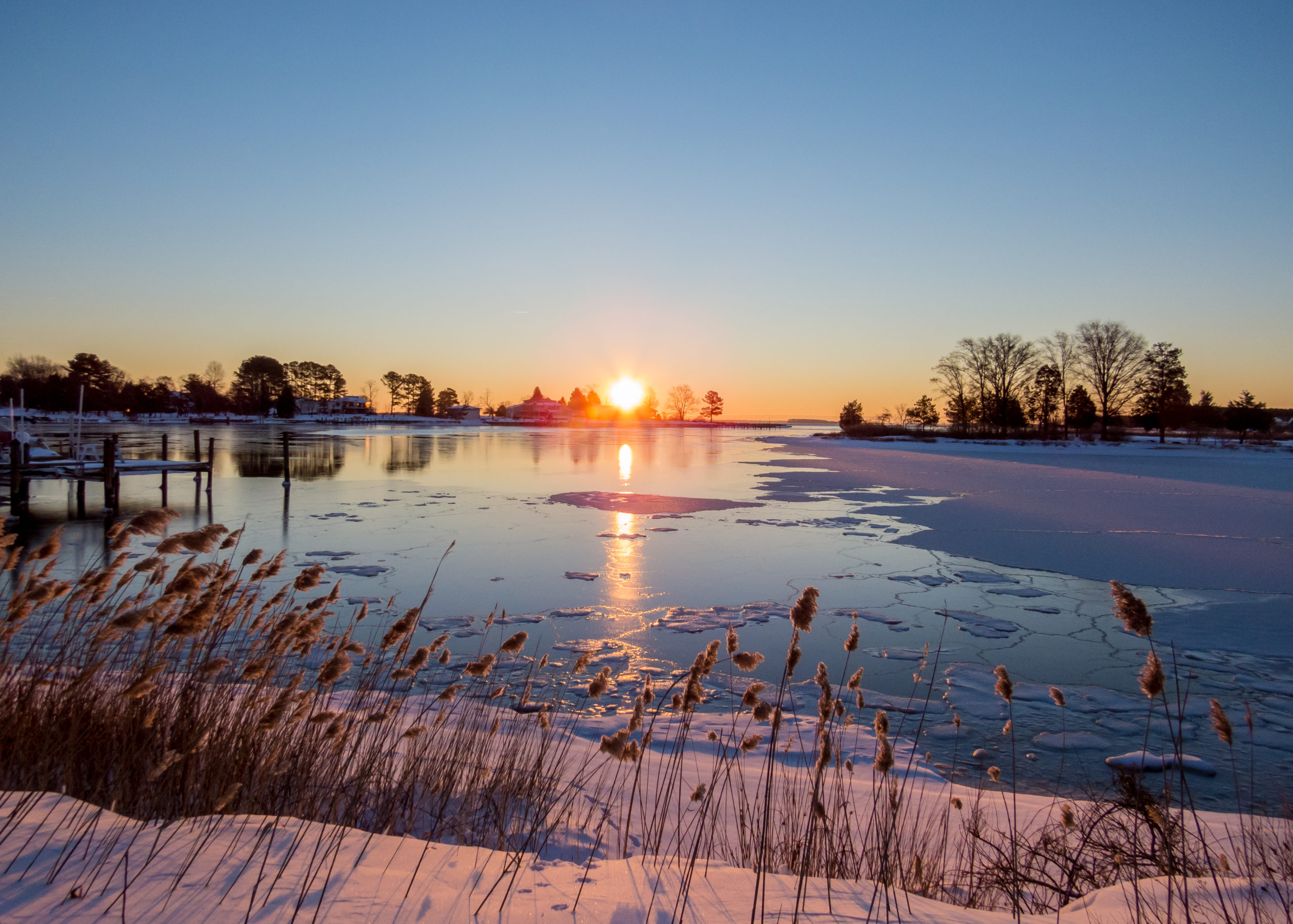 We asked our contributors to share their personal rituals that make this season special.

The Long, Strange Journey of the Steamship Potomac

A working steamship becomes a room with a view of history

How a small team of turn-of-the-century scientists mapped over 1,600 square miles of Maryland oyster beds.