It sounds funny to describe the new V-33 from Valhalla Boatworks as an “entry-level center console fishing boat from a new company,” but that’s the literal truth. What the description doesn’t say is that Valhalla is a subsidiary of 56-year-old Viking Yachts, now under the ownership and supervision of the second and third generations of the founding Healey family, and that it is built in a Viking plant on the Mullica River in New Jersey, managed by fourth-generation boatbuilder John Leek IV. Yes, the V-33 is the smallest offering from Viking, which builds semi-custom convertible sportfishermen and motor yachts up to 93 feet, but it’s a thoroughbred. Viking yachts are well-known on bluewater world-wide, but what struck us at Chesapeake Bay Magazine, especially after we took a sea trial in the V-33 last fall, was how well this splendid “little” boat could play multiple fishing and family roles here on  the Bay.

First off, it’s classically beautiful, with Viking’s trademark s-curve sheerline, faux-teak toe rails, and flawless finish. Second, it’s both fast and efficient. Though Viking’s extensive design and engineering team draws most models, this hull and its V-37 and V-41 sisters ride on patented Stepped-V, Ventilated-Tunnel running surfaces from Michael Peters Yacht Design. Viking’s designers collaborated closely with MPYD to integrate the SVVT to the rest of the hull.

The SVVT design effectively reduces hull-to-water friction at speed by drawing air under part of the running surface while ensuring precise handling across a wide spectrum of loads and sea conditions.

Twin 400-hp Mercury Verados powered our test boat for a spin in two-to-three-foot seas off of Annapolis with Viking’s Justin Healey and CBM’s Editor, Joe Evans aboard. Healey throttled us quickly up to 50 knots with the promise of more, but we thanked him and said we’d take the promise on faith (top end with these engines approaches 60 knots). At 50, the V-33 sliced through the chop easily, and it held course perfectly in tight turns, an acid test for slippery stepped hulls, which, if not designed with great care, have a tendency to spin out. Peters designed the hull to run slightly bow-proud, to present the sharp bow entry to oncoming seas while planting the stern firmly on course.

What was even more impressive was the boat’s efficiency. I watched the fuel consumption numbers in the engine management screen on one of the helm’s two Garmin displays as the boat accelerated through the twenties and the thirties. In the twenties, it made about one nautical mile per gallon, but at 30-35 knots, efficiency improved. The two big Verados were burning about 25 gallons per hour together, providing 1.2 nautical miles per gallon. I remember seeing figures like that twenty years ago from a much smaller 23-foot bowrider with a single 250-hp, old-style, thirsty two-stroke outboard. Those numbers give the V-33 a conservative range of about 400 miles. That’s what a well-designed stepped hull can do when pushed by top-class modern four-strokes.

Our test boat, V-33 Hull #1, was fitted  out for serious fishing. The basic layout is conventional, with an open bow; a two-person lounge on the front of the console;  a compact cabin beneath with electric head, vanity, and single berth; a helm module  with three-person bench or triple teak chairs; and a tackle station that includes a slide-out cooler which doubles as a two-person, aft-facing mezzanine seat for watching trolling lines. The transom holds a 52-gallon livewell flanked by fold-down jump seats. From bowto stern, the sole contains five overboard-draining, in-deck fish boxes, including a 98-gallon hold at the bow. The fiberglass hardtop includes bases for antennas and outriggers, spreader lights, an overhead electronics box, and a six-rod rocket launcher on the  aft edge.

What makes the V-33 stand out, though, is the attention to detail in design and execution. For example, the under-deck compartment just aft of the tackle station is configured to receive an optional Seakeeper 2 gyro stabilizer. Sightlines at the helm are excellent in all directions at the hull’s designed running attitude. The console, tackle station, and side decks all offer toe-kick space for keeping feet firmly planted in rough seas. The sole is gently crowned to send any rain or spray that might come aboard into cockpit-side gutters leading aft to grates directing it overboard. The door on the port side of the console slides forward on an ingenious mount to make it easy to enter and exit the cabin safely.

Later on, I visited Valhalla Boatworks to see how these rigs go together. The company sweats the details in places we normally can’t see. John Leek took me on a tour to see the building process, from initial hull layup and resin infusion of the stringer grid and liner to final assembly and quality control. Then I shadowed Travis Hayes, an application engineer from Mercury Marine, to watch him train Valhalla’s rigging technicians in the installation of the complex fly-by-wire electronic steering and control systems that make handling these boats so easy and smooth. True to form, Valhalla “house-makes” its wiring harnesses, and the Viking subsidiary American Marine Electronics installs whatever systems each boat’s prospective owner requests.

So, what makes the V-33 a good boat for the Chesapeake? It’s big enough to take offshore to the Chesapeake Light Tower or run open Bay waters anywhere from Virginia Beach through the mouth of the Potomac to Baltimore, but it’s still small enough to maneuver easily along the Chesapeake Bay Bridge-Tunnel, the buoy line off Cape Charles, the Targets below the Patuxent, the Stone Rock off the Choptank, or the Bay Bridges at Annapolis. It’s fast and able enough  to try multiple spots in a day. It’s  also adaptable for anything from trolling, jigging, and chasing gannets over breaking fish (especially with  its open-array “bird” radar) to  bottom fishing for tautogs, sea bass, or small pan and sportfish. The open bow offers space for casting a fly.  Add an optional Palm Beach Tower (another Viking subsidiary) for  cobia season.

Family features include a port  side door and a transom platform for swimming and towing toys, the comfortable cabin with head  and berth for a nap, an optional  pair of forward-facing bow lounges, and the comfort of a wave-damping Seakeeper. By the way, the lounges are positioned to allow casting  while bracing against the coaming  at the bow. With seating for  eleven (including the bow  lounges), it would work well for watching sunsets, and it could  easily serve as a Wednesday night or Saturday morning race committee platform.

Valhalla’s new V-33 may be  “entry level” for some people,  but a Chesapeake angler with a water-loving family might well  decide to stay right there for years. Built to the exacting standards of Viking Yachts, it’s going to last  a long time with proper care,  and its versatility will make it useful for many assignments throughout the Mid-Atlantic seasons. year.

CBM Editor at Large, educator, guide,  and author of three quintessential Chesapeake Bay books, John Page Williams  was proclaimed to be a Maryland Admiral of the Bay in 2013.

The EdgeWater 230CX makes it all work in a handy package. 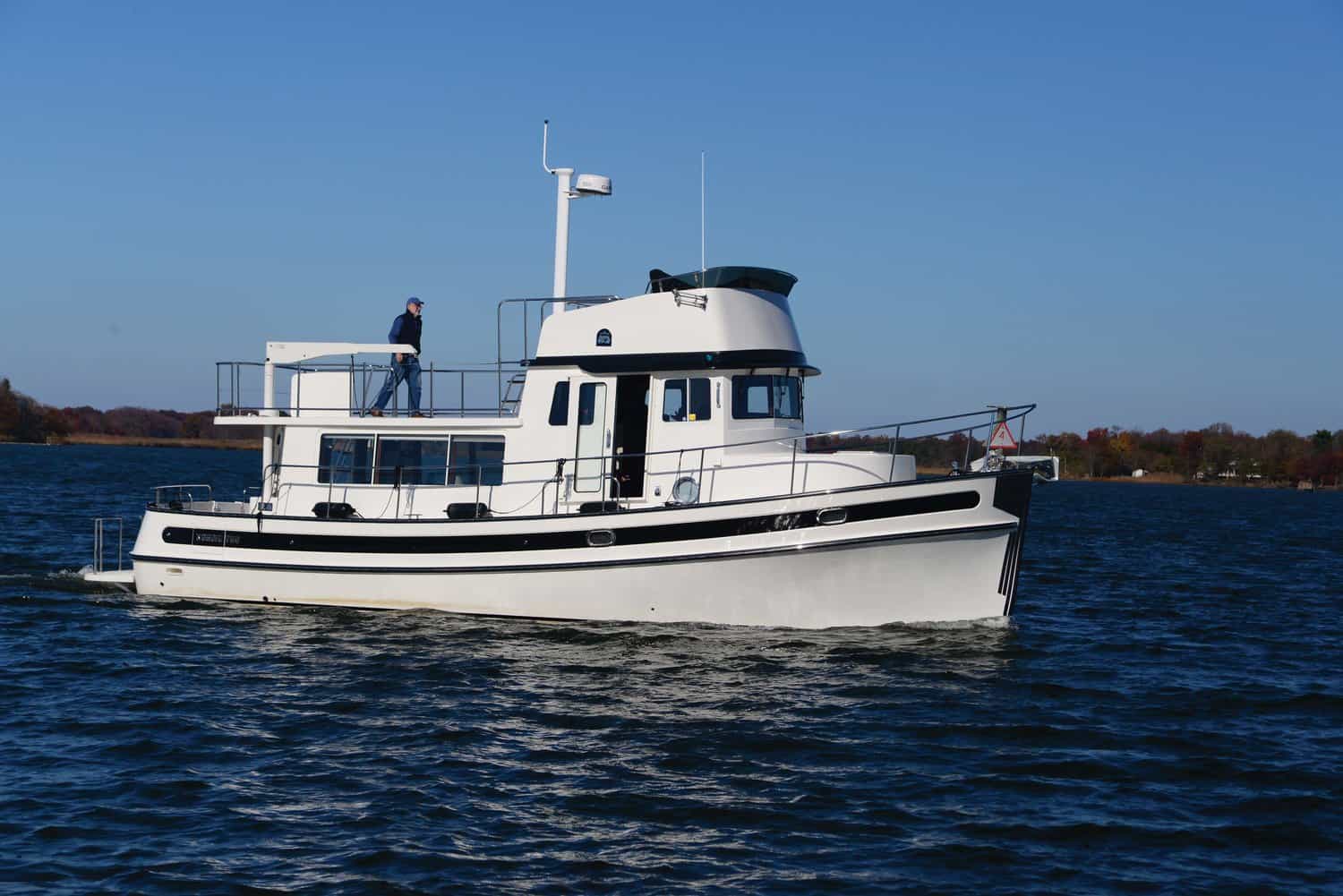 The Nordic Tug 44 has everything you need to cruise near and far in utter comfort.