Stunning video of dolphin pods are suddenly surfacing (no pun intended) from all over the Chesapeake Bay. The experts who track dolphins in our region say sightings are up 25% over last year.

Just outside of Brewer Creek (sometimes known as Idle River) on the Severn River, Anna Grace Keller and her sister Madolin Keller captured incredible video, shared by the Severn River Association, of dolphins swimming in perfect synchronicity between two boats. Watch below:

Anna Grace says about 30 dolphins in all were playing on both sides of the boat she and her sister were riding on.

“Dolphins popped up within arms’ length of us every couple of seconds, each time filling us with the same child-like joy as the time before. More boats joined the watch party as we continued down the river towards the Severn River Bridge, cheering, hollering and hooting at the amazing show the dolphins put on for us,” she tells Bay Bulletin.

Just upriver, a family at Linstead Beach on the Severn captured photos of an estimated dozen dolphins frolicking just off the pier at sunrise. Over the weekend photos and video were captured on Virginia’s Northern Neck, and the lower Potomac River as well as the Severn, and in the Patuxent and Miles Rivers last week.

Indeed, dolphin sights have been abundant this summer, according to the University of Maryland Center for Environmental Science (UMCES) Chesapeake Biological Lab’s Chesapeake DolphinWatch program. As of July 15, people on the Bay have reported 500 sightings using the DolphinWatch smartphone app, compared to 400 at the same time last year.

And use of the app itself has picked up in the three years it’s been around. UMCES Research Associate Professor Dr. Helen Bailey and DolphinWatch Project Coordinator Jamie Testa say there are now 6,500 active users on the Bay, and daily usage is higher in 2020 than in either of the app’s previous two years.

“We were concerned that there would be less people on and around the Bay this year and fewer dolphin sightings because of the pandemic. This does not seem to be the case,” Dr. Bailey tells us.

In fact, more boaters than ever seem to be on the water this summer, looking to get away on the Bay rather than travel out of the region. That means more eyes on the horizon, spotting dolphins in the Bay and its rivers.

Atlantic bottlenose dolphins were considered a “depleted population” following a 2013 disease epidemic, but Dr. Bailey says the plentiful sightings are a sign that the dolphins are rebounding.

While some people on the Severn can’t remember hearing of so many dolphin sightings that far north, Dr. Bailey says the sightings have become a regular occurence near the Bay Bridge, and into the Severn and Chester rivers, especially in June and July.

Dr. Bailey and Testa use the sightings reported on the DolphinWatch app for research purposes. Read a just-released fact sheet on their findings from 2017-2019 here: https://www.umces.edu/sites/default/files/Chesapeake%20DolphinWatch%20Fact%20Sheet.pdf

In addition to the citizen reporting data, the DolphinWatch team has also been using devices to listen for dolphin calls and their signature whistles or “name” so they can identify and track individual dolphins. So far, the devices have caught 250 unique dolphin whistles on the Potomac River alone.

For a step-by-step tutorial on how to get and use the DolphinWatch app, watch UMCES’s video below:

Boats operating as charters– without the required license– are on the rise, and the Coast 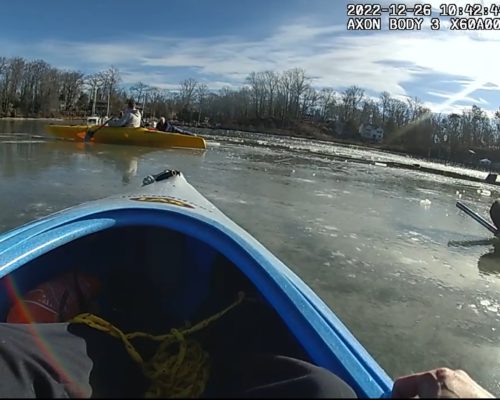 VIDEO: How Heroes in Kayaks Rescued Pilot from Iced-in Creek

The plane crash and amazing rescue just south of Annapolis made national headlines: a single-engine