It’s late August and prime time for algae blooms in the Chesapeake Bay. In the summer months, the water is warmest and oxygen levels are historically lowest.

The Virginia Institute of Marine Science caught some dramatic aerial video showing just how widespread these algae blooms can be.

In the mouth of the York River, it looks like a paintbrush has been dipped in green paint and swirled around. VIMS PhD student Savannah Mapes captured the video below:

According to VIMS scientists, “The dark streaks and swirls that you see are caused by a bloom of a dinoflagellate called Margalefidinium polykrikoides (‘Marg’ for short). This is one example of a Harmful Algal Blooms (HAB).”

What makes an algae bloom (which happen commonly) “Harmful”? When it grows in great numbers, the overabundance of algae hogs much of the oxygen in the water necessary for fish, crabs and other organisms to survive. That creates a measurable “dead zone”, an area of little to no oxygen that forms in the Bay in summertime.

Fortunately, this year scientists predicted a smaller volume of low-oxygen Bay water this summer, and in June that prediction rang true. We are still waiting on data from July and August, but overall the multi-agency team of experts predicted a 13 percent better-than-average dead zone this year.

The frequency and size of algae blooms can depend on weather and water conditions (like heavy rainfall in the spring, for example). It can also depend on how much the Bay is polluted with excess nutrients from runoff including nitrogen, phosphorus, and sediment. VIMS says fertilizers are at the root of many of the algae blooms, but until fertilizer production is restricted, its use in the Bay watershed will continue.

In addition to dead zones that hurt marine life, a large volume of algae in a HAB can also generate toxins, which may even impact human health.

The effect on peoples’ health isn’t well-established yet. VIMS’ HAB expert Dr. Kim Reece says, “’Marg’ can be associated with adverse impacts to aquatic animals, but human health impacts are not well-defined (though some respiratory irritation has been reported).”

If you are in the area of a large bloom like the one on the York and have any health concerns, contact the Virginia Department of Health through the HAB hotline 888-238-6154. 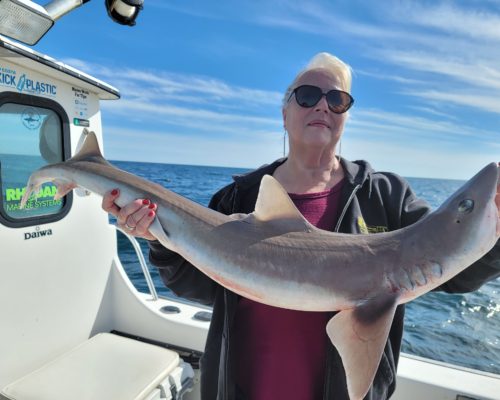 A fishing trip that was almost canceled became a memorable one, when a Pennsylvania woman

Last week, a team of malacologists from Virginia’s Department of Wildlife Resources (DWR) and the