It’s usually festivals and concerts that attract big crowds to the Virginia Beach oceanfront, but five sea turtles were responsible for the massive gathering of onlookers on Friday, excited to watch the animals’ release.

The Kemp’s ridley and loggerhead sea turtles, all rehabilitated thanks to the Virginia Aquarium and Marine Science Center’s Stranding Response Program, were cheered on as they made their way into the waves behind Neptune’s Park.

Before the turtles were placed on the sand to begin their brief scurry into the water, aquarium staff took time to answer questions and give visitors an up-close look at each of the rehabilitated reptiles. The team says both loggerhead and Kemp’s ridley sea turtles are common along the Virginia coast.

Each of the five rescued turtles has a unique story, according to the aquarium:

Drake, a loggerhead turtle, was reported by a citizen after being found on Lynnhaven Beach last winter. The animal was described as a “cold stunned patient” whose heartbeat was at first undetectable.

Captain, a Kemp’s ridley, was found by the Chesapeake Bay Bridge Tunnel last August having suffered flipper and cranial fractures.

Poppy was hooked in Hampton. The aquarium says that the hook fell out but a fragment of a separate hook was found in the Kemp’s ridley’s throat and was removed via surgery.

Honeysuckle, another Kemp’s ridley turtle, was hooked by a line in the esophagus in Hampton earlier this summer. The line was removed by the aquarium’s Animal Care Center while the turtle was sedated.

Wisteria was hooked in the mouth at Little Island Fishing Pier in May. The team discovered lesions on the Kemp’s ridley turtle’s shell, which it says were consistent with shark bite markings.

Mark Swingle, Director of Research and Conservation at the aquarium, emceed the release event. Of the importance of rehabilitation efforts, he says “These are endangered, threatened species. The reason that all but one of all these turtles are here is because of negative interaction with human activity, so we feel like we’re doing our part to help recover the species and get these animals back into the wild.” 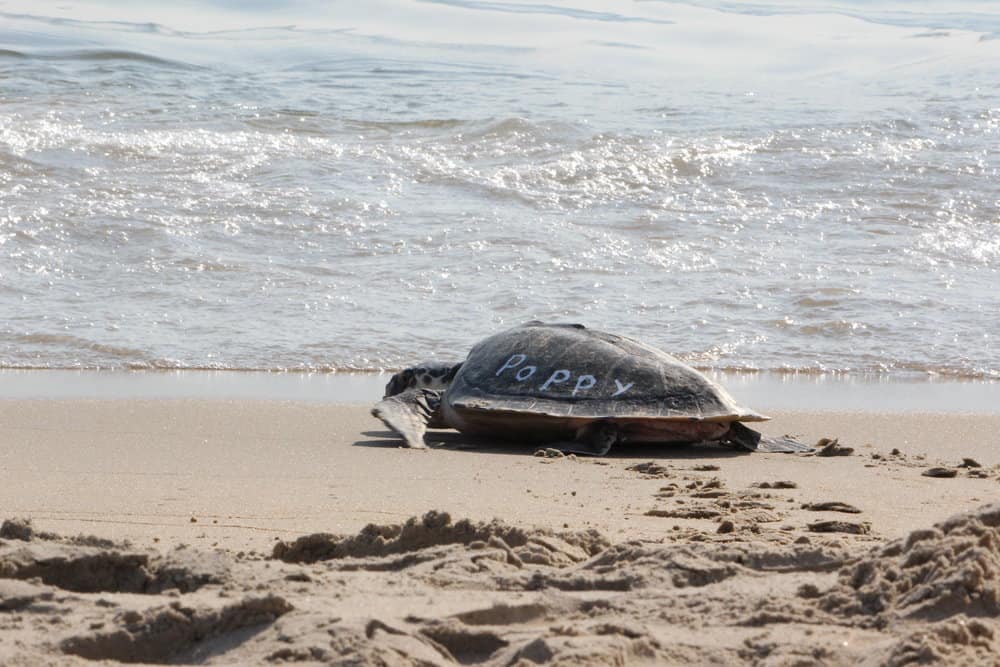 Pilot Program Launched to Control Midges on Back River

Midges: the tiny, pesky nuisance that will slowly drive you crazy if you spend time