Conditions are just right this week for yellow perch to spawn in the Bay’s tributaries, and on the upper Magothy River, volunteers captured rare video of the spawning underway.

It’s significant because until recently, the Maryland Department of Natural Resources (DNR) didn’t believe the Magothy was healthy enough for yellow perch eggs to survive. The Magothy River Association (MRA) spent the last three years trying to prove them wrong. They found and monitored up to 100 egg sacs in the water at a time, taking larval samples. Under microscopes, MRA, residents, students, and DNR looked for larvae in the samples. In 2016 and 2017, they found larvae in the furthest-upriver sample areas.

2018 was a bad year for yellow perch spawning survival rates in several sites DNR monitors, as well as in the upper Magothy. But if the video below is any indication, the yellow perch spawn is having a resurgence in 2019.

MRA volunteer Mike Maguire caught the action with his GoPro, mounted to a ten-foot-long piece of PVC pipe and dipped underwater at just the right time. You can see hundreds of yellow perch headed upriver toward the Lake Waterford Dam, and you can make out their egg chains, each containing more than 20,000 eggs. Watch below:

Maguire tells Bay Bulletin that catching the moment on video was part luck, and and partly thanks to MRA’s extensive knowledge of prime spawning conditions (salinity of two parts per thousand or less and temperatures between 8 and 12 Celsius, according to MRA Vice President Sally Hornor, PhD).

Says Maguire, “I will say this, as far as being there and documenting it, watching the spawn, it was an awesome thing to experience.”

The yellow perch spawning takes place in the area of Catherine Avenue in Pasadena. After they finish spawning there, the fish will swim back down the river to the Bay, and return to the same spot next year.

MRA wants to document successful yellow perch reproduction to strengthen their case for more protection from land development. MRA would like to see the area designated as a fish-spawning Habitat Protection Area, and receive special consideration when it comes to development approval.

“The uppper Magothy has good habitat and we would like to keep it that way,” says Hornor. 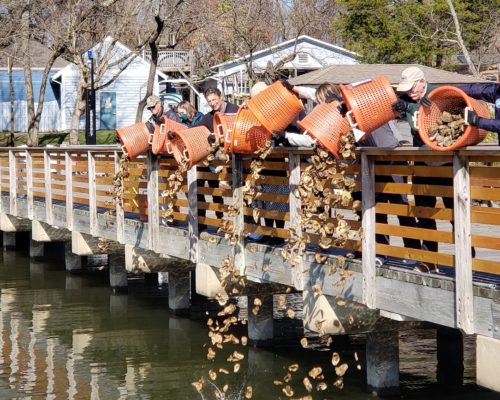