Video posted on Facebook over the weekend of a woman’s interaction with an Assateague wild pony is getting a lot of attention–and serves as a reminder that the island belongs to the ponies.

The footage shows a pony nosing for food on a beach blanket with beachgoers nearby at Assateague Island National Seashore. A woman walks up behind the pony and hits it with a shovel, in what appears to be an attempt to shoo it away. When the pony is hit, it kicks the woman from behind. She does not appear to be seriously injured.

The video went up on the People of the Ocean City Boardwalk Facebook page (a group with nearly 45,000 followers) on Saturday and has been shared 4,000 times. Watch below:

Assateague Island National Seashore says law enforcement staff were notified about the video, as it violates the Wildlife Protection code prohibiting “the feeding, touching, teasing, frightening or intentional disturbing of wildlife nesting, breeding or other activities”–including those of horses.

The Maryland herd is a free roaming population and have access to all areas of the island from the Ocean City Inlet to the Maryland/Virginia state line. The law (posted on signs at both Assateague State Park and Assateague Island National Seashore) require people to maintain a distance of 40 feet from the horses at all teams– even if horses come into an area where you are set up on the beach.

If horses do approach, calmly move away to a safe distance. While most of the island’s horses are skittish, those that live in the developed area around the beach have become conditioned to humans and see us as a food source–so they do what the Assateague Island Alliance calls “beach blanket raids,” searching for visitors’ snack bags. The national park’s partner nonprofit explains that horses may become aggressive around a food source they consider to be theirs. That makes it especially important to secure all food as you would at a campsite.

“In addition to avoiding being bitten or kicked, you are helping to keep the horses healthy as human and pet food has been the direct cause of illness and death in some individuals among the wild horses,” says Assateague Island Alliance Outreach Coordinator Ashlie Kozlowski.

The Assateague Island Alliance says situations like the one in the video has happened before. Board President Nancy Gaither says some people don’t realize how unpredictable the horses can be:

“Over the weekend, I saw a woman posing for a photo with a young stallion (who is very active these days in trying to “recruit” mares. He’s been in several altercations with other stallions). This woman had her hand on his rump, not understanding he could “turn” on an instant,” Gaither recounts as an example.

The group continues to work with the National Seashore to educate the public to avoid these negative interactions. There are three Horse Management Interns to remind people about safe distancing. All 222 picnic tables were replaced last year with tables houses horse-proof food storage boxes, and the partner agencies distribute nylon cooler straps to secure food that visitors bring into the park.

“The short term goal is to keep food inaccessible to horses so they will return to their natural forage of marsh grass and the long term goal is to de-habituate the horses to no longer associate humans with food,” Kozlowski tells Bay Bulletin.

Ultimately, “Visitors must take personal responsibility for their actions and behaviors when visiting Assateague or any other natural area with wildlife present,” National Park Service Chief of Interpretation and Education Liz Davis says.

“Obviously, most beaches do not have wild horses roaming about, but that is just the reason to find out more about this place before you arrive. We have a phone number, a website and social media platforms that may all be utilized for more information.” You can call 410-641-1441 or visit www.nps.gov/asis .

“Don’t Suck. Sip Responsibly” sounds like it could be a PSA about alcohol abuse, but 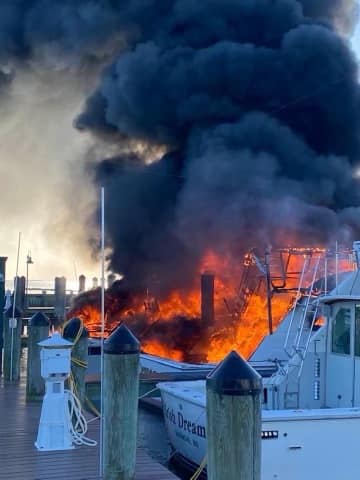 Police are investigating a three-boat fire at the Rod ‘N’ Reel Marina, part of the