A modern Bay boat for fishing and cruising with family.

Jim Weaver says he developed a Chesapeake Bay-styled boat so he could finally see some of his boats around his home waters. “Otherwise,” he says, “I’d have to go someplace like Costa Rica to watch one catch fish.”

Over the past twenty years, Weaver’s custom 50- to 97-foot big-game sportfishing boats have set a high standard in bluewater tournament competition from the North Atlantic Coast to Central America. His new 43-footers however, are pure Chesapeake, with graceful, deadrise-styled sheer lines and hulls. Like all Weavers, they are cold-molded on wooden frames using okoume marine plywood, epoxy resin, and Kevlar cloth. We had a chance to experience Alternating Currents, the second of its kind, on a bumpy day out of Weaver’s Hidden Harbor Marina on Rockhold Creek in Deale, Maryland. Hull number three was under construction as a research vessel, and the fourth was on the build list with a, coast Guard-inspected, fifty-foot, charter-fishing version on the board.

Jim Weaver grew up in Prince George’s County, Maryland. He apprenticed as a union carpenter and quickly developed talents for the building trades and business. Over the next fifteen years, he  built several hundred houses and more than fifty grocery stores. He had always loved fishing, and in the early 1980s he began taking time to go offshore for billfish. He bought a used Ocean Yacht 42 and soon moved up to a 55-foot Ocean to support his passion. Through the ‘90s, he fished beside a number of Carolina-style, cold-molded boats, and he studied them as he contemplated having a bigger boat. “They were expensive and built rough,” he observed on our recent visit. “Rather than buy one, I figured I could make my own for less.” In 1998, he started building Dream Weaver, a 58-footer, in a shop behind his house. He started by imitating the lines from a boat he liked designed by renowned, Virginia-based designer Donald Blount.

“I learned a lot,” he says with a chuckle. “When I got the bare hull completed, an older boatbuilder told me, ‘Congratulations, son, you’re about ten percent done.’ Dream Weaver went way over time and budget. There are so many details, and so many consumables like cans, rags, gloves, and buckets. They all add up.”

Even so, Weaver’s new boat handled well, and he took his family to Cancun to fish her in 2000. At the dock in Palm Beach on the return trip, a gentleman noticed the boat and made an acceptable offer. Weaver left the boat there, flew home and started planning the next one.

This time, he reached out to Donald Blount & Associates (DLBA) for the design and rented space at Herrington Harbor North in Tracy’s Landing for the project.

“DLBA was still taking new customers then,” he says, “so I asked for a 65-foot design. We built her, fished her, sold her, and began another.” Since then, DLBA has produced twenty-one design packages for Weaver Boat Works. The company has thirty-five boats out fishing including three 75-footers, six 80-footers, and a recently launched 97 footer. We counted three boats under construction on our visit, and there are more on order.

Weaver’s attention to detail complements the thoroughness of DLBA’s design and engineering, especially with regard to weight distribution. Weaver and the Blount design team are committed to installing engines with V-drives, which allow flexibility for optimizing balance and efficient shaft angle. He also embraces cold-molded plywood/epoxy techniques used by most one-off sportfishing boat builders.

“It’s a great way to build a boat,” he declared as we toured the Hidden Harbor shop. “These cold-molded hulls are light, strong, and stiff.” For a typical new order, Weaver convenes digital conferences with the client and Larry Belkov, whose Annapolis-based Belkov Yacht Company designs and fabricates the boat’s interior, to work out the accommodations and capability details.

Based on the conferences, DLBA provides a meticulous, three-dimensional, digital design including specifications for plywood thickness, ounces of epoxy resin and cloth, engine weights and location, and all interior arrangements and equipment in order to arrive at accurate predictions of weight, balance and performance.

The design feeds Weaver’s two CNC routers, which cut the plywood jigs around which the hull will be formed. After the jig is assembled, the yard’s lamination crew builds up the keelson, stringers, and chines, and glues them in place. In the Weaver 43, the full-length keelson is made of clear 5.25-inch fir boards, built up to a height of eight inches, with 12:1 scarf-joints at alternating intervals. While those parts cure, the crewmembers cut panels for two layers of 12 millimeter marine plywood for the bottom and nine millimeter plus six millimeter topside layers sized to allow bending under pressure (cold-molding) to conform to the design. The first layer of panels gets glued to the keelson, stringers, and chines, and fastened into place with stainless-steel ring-shank nails. The second layer of panels goes on by the same process, but set at right angles to the first, providing a huge surface between layers for the epoxy bond, and temporarily fastened with screws. When the epoxy has cured, the crew backs out the thousands of screws, fills the holes, and fairs the surface. Then the hull gets epoxy-saturated layers of Kevlar (bottom and chines) and fiberglass cloth inside and out.

“Epoxy loves wood,” Jim Weaver says. Plywood soaks it up, so a well-fitted cold-molded hull becomes a single part with no fasteners to deteriorate or loosen. The boat is then faired smooth inside and out in preparation for Awlgrip linear polyurethane primers and high-gloss topcoats.

Meanwhile, Belkov’s crew creates a 3-D plan for the interior, which is then computer-cut and assembled into modular units. The resulting, cabinet-quality, workmanship is finished to the new owner’s liking and fitted into the hull, cabin, and pilothouse. If the whole process sounds to you like a giant, three-dimensional jigsaw puzzle, you’re right. Welcome to twenty-first century design and construction.

The results are spectacular. Our ride on Alternating Currents showed them off. She’s a streamlined, yacht-grade version of the classic Chesapeake sportfishing boat with a forward cabin including twin berths and an enclosed head, pilothouse with dinette and galley to port,  starboard helm, and a long settee. Her large, open cockpit includes the box for her single 550-hp Cummins QSB 6.7 engine, an aft helm, and two aft-facing seats against the pilothouse bulkhead. One clue that she is a state-of-the-art vessel is the aft-helm, Glendening joy-stick control, which manages her Vetus bow and retractable stern thrusters, and the Cummins and its transmission. Open the hatch just forward of the engine box and you’ll find a Seakeeper stabilizing gyro.

Underway, Alternating Currents has an uncanny feel. The Seakeeper holds her as if she were on rails as she runs straight and carves tight turns a traditional deadrise wouldn’t achieve, since she has no external keel. Blount & Associates designed her propeller shaft tunnel to provide the prop a solid stream of water to bite at all speeds without causing vibration or noise. The Cummins quietly pushes her 22,000-pound hull happily at 25 knots (87% load), while burning a mere 18 gallons of diesel per hour.

Our sea trial offered enough seaway to show that she’s dry and comfortable in the waves. In fact, we can attest that her owner skippered her to a win in November’s Fish for a Cure Tournament on a very rough day running between Herring Bay and Tilghman Island with 15- to 25-knot northwest winds on the beam. Even so, Alternating Currents provided her crew with a safe, comfortable platform on the troll, and her owner was amazed at how the Seakeeper helped her shoulder seas aside and hold course on the run up-sea to Annapolis for the weigh-in.

Every Weaver boat is a custom project, so the cost of a fully appointed 43 will vary according to the owner’s wishes in a range from $600,000 to around $620,000. www.weaverboatworks.com.

CBM Editor at Large and author John Page Williams is a licensed captain and Maryland fishing guide. He has been on staff at the Chesapeake Bay Foundation as an educator , writer and senior naturalist, saving the Bay since 1973. In 2013, the State of Maryland proclaimed him an official 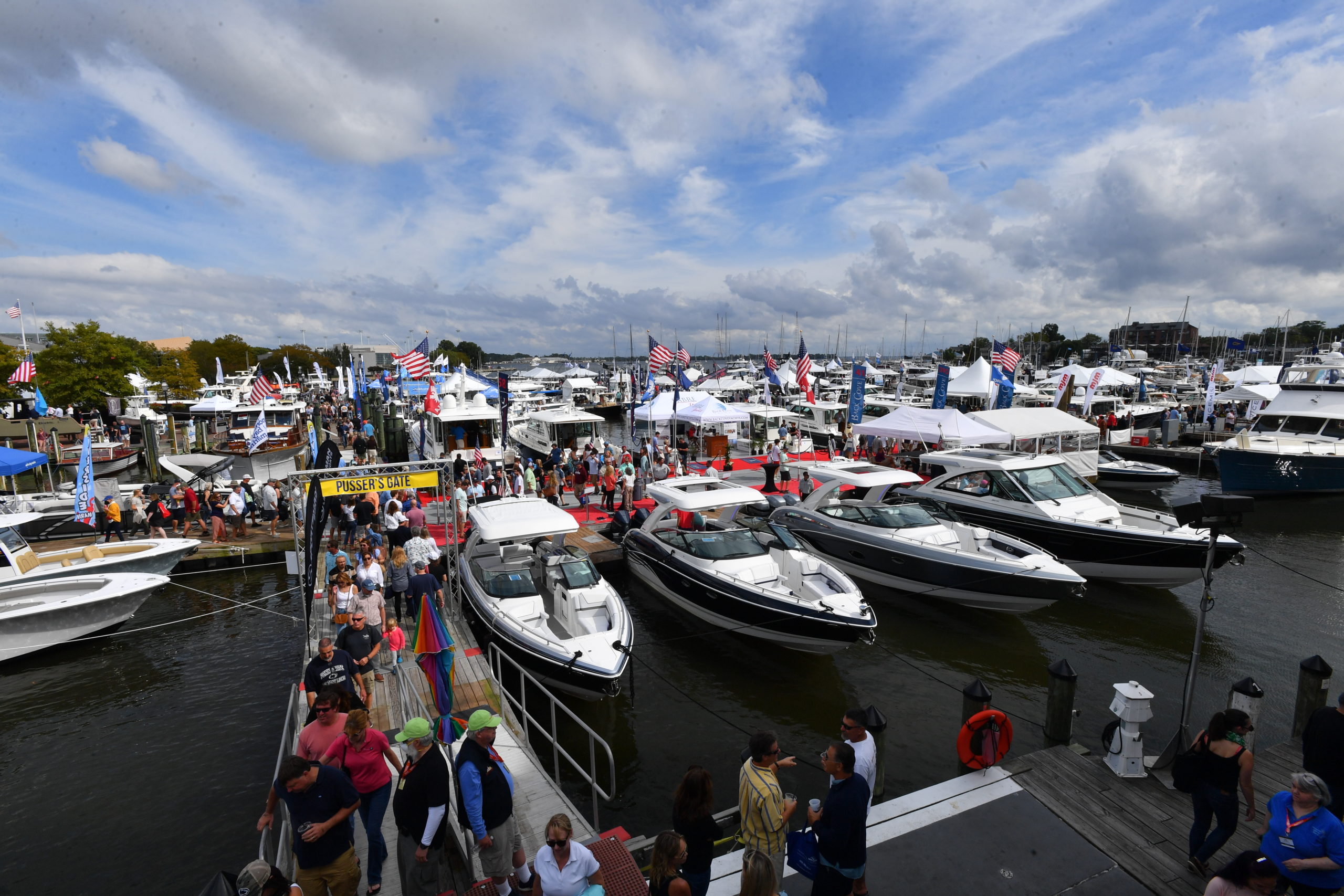 Boats Not to Miss

So many boats, so little time. Even if you went to all four days of

Stability and toughness in a roomy family platform. 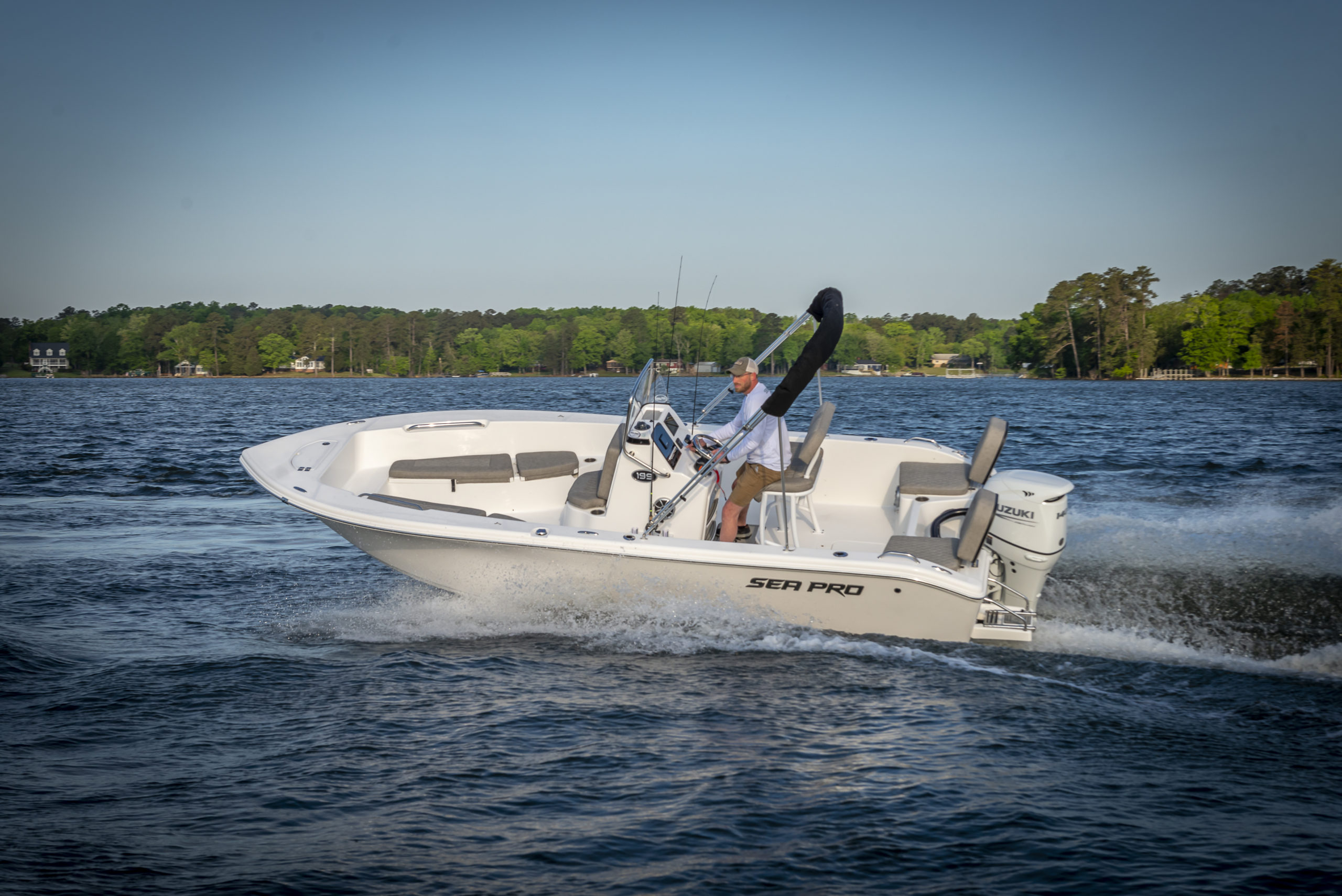