Why planning doesn’t always pay off, with examples.

Things are not going well. We are headed south out of Fort Myers, tracking the coastline toward Naples, and things are not going well at all. The ship’s security chief, Bindi, an untraceable canine mix, gives me a hard look. “It’s your job not to let this happen,” her eyes say as clearly as if she were a Marine Corps drill instructor with a sociology minor. Sammy, the navigator trainee, also a seafaring pooch, is concentrating hard at some point on the horizon, pretending that none of this exists. “I’m not here. I’m not here,” he chants to himself. Jean, the only other human on the boat, sits as far back as she can get on the cockpit seat with the two dogs. They are trying to get away from the spray that comes over the bow and in through the open front windows with every second or third wave. The windows are open so I can try to pick our way through the crazy-quilt seas.

“Are we going to die?” Jean asks, trying to sound as if she’s not really serious.

“Shoot no, no, of course not,” I reply. And we’re not. I’m pretty sure. We are just having a thoroughly miserable time of it and making no progress at all against the steep seas that are coming at us from three or four different directions. The wind is howling. The seas keep rising. Early on in this predicament, I had picked a momentary lull and spun the boat back the way we’d come, Fort Myers’s San Carlos inlet. But as the waves and current bustled us north, I could tell that they were pushing us toward the tip of Estero Island instead of the inlet, which makes a jog west. In order to hit the channel, we’d have to come broadside to the seas. That, I knew, could be disastrous.

Four years earlier, not far from where we were now, my husband Rick and I had been caught by surprise in a steep, beam sea as we crossed the mouth of Boca Grande Inlet where it enters Charlotte Harbor. Suddenly, Moment of Zen began rocking wildly. Down below, the toaster oven and printer crashed to the cabin floor. The chart locker door swung open and smacked the television set below it, cracking its screen. Snapping out of our shock, we quickly angled up Charlotte Harbor enough to take the seas on our stern quarter. Immediately, Zen settled down. We held our course up Charlotte Harbor until we were past the inlet and could return, wiser but now a bit poorer, to the Gulf ICW channel.

The waves in this present case were a lot steeper, which made the prospect of riding a beam sea into the inlet considerably more dangerous. Dangerous enough to roll a 36-foot Endeavourcat? Possibly. Not worth taking the chance. So, I did the only thing I could think of. I waited for another lull and reluctantly turned Zen back to face the incoming seas.

How did we get into this predicament? The answer is simple: This was not supposed to happen. That morning, at anchor behind Sanibel Island, I had checked marine and local forecasts. South winds five to 10 knots, seas one-foot or less. I checked the tides and currents: max flood 1:30 p.m..  Fine. We left the anchorage about nine o’clock and passed through San Carlos Inlet about 10:00, catching the last of the ebb. At about 11 o’clock, the current turned, and the wind piped up out of the north. Perversely, as the current picked up, so did the wind.  By noon it was blowing 18 to 20. At this point, the waves began piling up quickly. By 1:30, about 20 miles south of San Carlos, we were being drenched in wave after wave of spray. Braced into position at the helm, I stared through the open windows, trying to pick out the highest waves to take off our front quarter then steer hard for the next one. Our progress could be measured in inches.

Now, remember where we left off, because I need to tell you why I’m telling you this story. Which is, that as fun and pleasant and jolly as boating generally is, it is also occasionally an unalloyed pain in the neck calling for ingenuity, perseverance, and the ability to pretend you know what you are doing. At these moments, discomfort is also usually involved. Sometimes, as in this case, quite a bit of discomfort. None of us is immune. We make our plans, set out happily and then, from time to time, are caught by some nasty surprise or other. For example, I’ve had a new engine fail mid-channel while navigating through busy Norfolk. And I realized that I’d lost a prop when I turned to come up against a face-dock and nothing happened, which is to say, I continued heading for the dock. Squalls, unexpected shallows, beer left on the dock . . . we’ve all had it happen. It’s what makes boating more than an A-to-B occupation. It challenges us. It makes us better and more self-reliant in spite of ourselves. And it gives us better stories to tell at parties.

I have spent hundreds of pleasant days out on the water, but I’d be hard put to describe them to you, and if I could, you’d probably doze off anyway. But the unexpected, I remember. I’ll not forget the last day of a month-long trip up the ICW two years ago when I left an anchorage on the Little Choptank  for the final leg up to Annapolis and home. A major storm with two days of gale-force winds was forecast to begin late in the afternoon. Instead, it arrived mid-morning while I was just off Bloody Point. With the wind coming in from the east, I tried to find some protection along the Eastern Shore, thinking I could anchor up Shipping Creek if I absolutely had to. But there was no shelter to be had on the east side because the wind immediately began to back to the northeast. Now the leg northwest to Annapolis would give me a very wicked beam sea. Yes, that again. I cut the best angle west I could and managed to reach West River. It was a Sunday morning in early spring, so the marinas were closed and the usual anchorages looked blowy white and uninviting. I decided to head back out of the West and try to make the turn into the Rhode River where there would possibly be more protection from the northeast. By the time I reached the Rhode River channel, however, I realized I was far enough south that I could take the waves on Zen’s port quarter about a mile into the Bay and then get the same angle on the starboard quarter into Annapolis harbor. Woo-hoo! I finished those last two legs with a kind of joy, reveling now in the storm because I knew I was home free. Home free by luck, perhaps. But home free, nonetheless. Which seems how a lot of trouble works itself out. You just keep plugging away at it, trying one thing and then another until it finally sorts itself out.

Now none of the things I’ve mentioned has been life-threatening and none has been anything completely bozo, like sailing into a hurricane, or setting out for Bermuda with half a tank of fuel and no sails, two things you may be surprised to learn I have never done. No, you can’t just potter about willy-nilly with no thought. Boating demands something better of its skippers. Though, speaking of bozo, very many years ago, while sailing an old wooden Comet off Dog Island, Florida, I was busy worrying that the rudder might come off and instead the mast fell down. In any case, do all the prep work you can, which I clearly had not done with the Comet, but when things do go awry, don’t lose your head. Keep trying until something works, and, above all, buy good towing insurance.

Okay, back to my story, which you may or may not recall was about trying to get south out of Fort Myers. I knew that our misery had a time limit. As long as I didn’t bury the nose or get turned sideways, the current would eventually slow to slack and then begin to move with the wind. This would let the seas lay down, and we could be on our way. And that’s exactly what happened. It seemed like an eternity, but three hours later we could begin to measure our progress against the high-rise apartments and hotels along the beach, and the waves became only a minor nuisance. We reached Gordon Pass into Naples just after dark, and, with Jean standing on the front deck with a spotlight, we worked our way up the Gordon River channel. In the blackness, we found nothing that would work for an anchorage, but I remembered that a few years earlier, Rick and I had docked at the city marina. And this, I remembered, had a fuel dock. If that dock was empty, which I fervently hoped, we could tie up and explain our presence in the morning. It was, and we did. That night, Jean and I walked the ship’s dogs through Naples’s 5th Avenue shopping district, bright and busy with late-night crowds. We joined them as if we had never had a care in the world. Ah, it’s fine to be a boater!

CBM Cruising Editor Jody Argo Schroath, with the help and not infrequent hindrance of ship’s dogs Bindi and Sammy, goes up and down bays, rivers and creeks in search of adventure and stories.

Our cruising editor’s 2019 picks for Best of the Bay 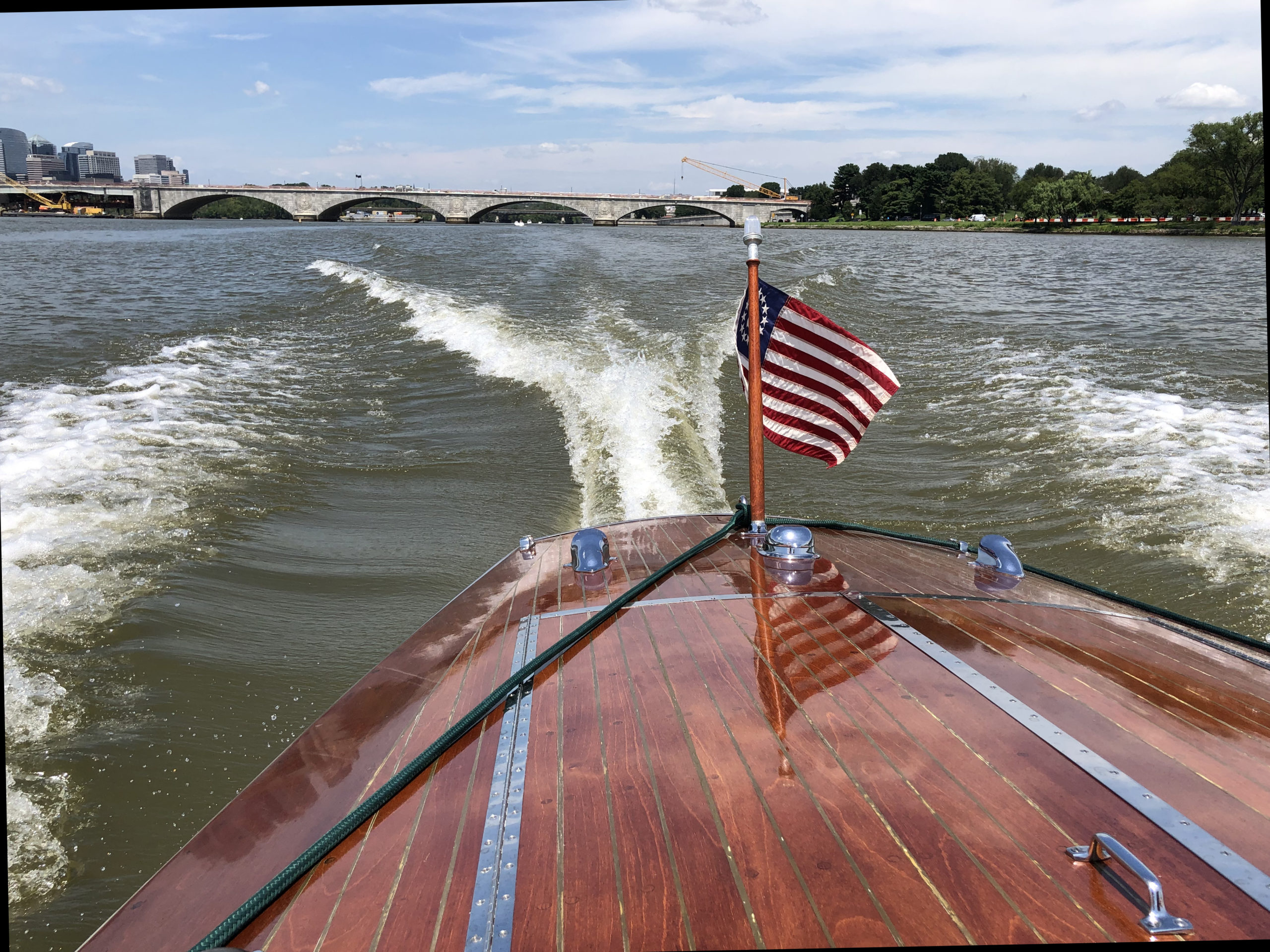 Best of the Bay Boating

BY CAROLINE FOSTER Creative Director I’m not from the Chesapeake. I come from the land-locked